In elections, like every other game, there is always a winner and a loser. That’s just how games are played. By rights, if you cannot accept that you have a 50/50 chance of falling in either category, then you should probably not be playing at all. Looking at the recently concluded general elections in Nigeria, however, there is one party which I staunchly support that conducted itself in the greatest possible manner, invested most heavily in the electoral process and deserved, above all others, to secure a resounding victory. I am speaking, of course, of the Nigerian voters.
In the midst of struggle, sometimes you hear the most inspiring stories which cannot but warm your heart. These elections, the stories have been pouring in and have served to renew my faith in the spirit of the people.

With final results due in #Nigeriadecides it promises to be a busy day. Our live coverage here http://t.co/kNbNKVC2cl pic.twitter.com/nCA4IxcaYz

To start with, the build-up to the elections was intense. It was recently put to me that the silver lining to the troubles Nigerians have suffered in the recent past is that now more of us have realized that it is indeed our country to save or let perish. The gentleman pointed out that, 4 years ago, we did not discuss elections so heatedly, nor debate issues so passionately. At times it may degenerate into a shouting match, but that is not to distract from the progress made in getting people to consider the options and choose a position.

And then there were the millions that came out to vote. Despite the tension in the air, and the constant fear of violence, people came out en masse to play a part in Nigeria’s democracy as citizens.

Even some who had fantastic excuses not to be there, still came out to vote. 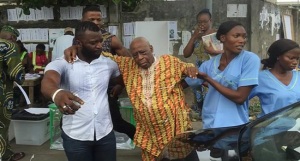 As well as the young, obviously…

And the younger still.

Even while standing in line waiting for their turn to be accredited, messages were flying around on social media instructing people of many things, including if the biometric reader in your ward fails to read fingerprints, politely ask the INEC (Independent National Electoral Commission) official to remove the plastic film covering the sensor and try again.

INFO: RT @Africanelection: #NigeriaDecides Before going out to vote today, 3 tips you must follow. pic.twitter.com/Zu2T1Q1OmE #Nigeria2015

By far the most impressive part, in my opinion, was what happened after the votes were cast. Despite the recommendation (for want of a better word) by the Inspector General of Police to cast your vote and immediately leave the vicinity, Nigerians took it upon themselves to protect their votes. They waited for everyone else to peacefully make their decision at the ballot box and then together, as one, they patiently waited for the votes to be counted and tallied up. I am hard pressed to think of a greater show of democratic patriotism than casting your vote, and protecting it until it is officially logged in. Some of these people had to wait until long after nightfall before they could return home.

A final impressive feat was still to come, however. The world had been on edge, fearing that electoral violence had become such a feature of our political structure that it was almost a foregone conclusion that there would be great loss of life. And while there were attacks as well as thuggery, it was on a much smaller scale than analysts might have predicted, based on our past. Because most people had already secured their bunkers, after having their votes counted, the people went home. And stayed there. This simple act denied potential terrorists and/or thugs of viable targets to attack, and is probably what helped to make these elections so historic.