Recently, the Ibadan Polytechnic reportedly set ablaze over 1000 mobile phones worth an estimated N15million. According to the polytechnic, the mobile phones were confiscated from students who brought them into an examination despite the rules at pretty much every institution of learning which prohibits students from bringing such devices into an examination. According to the polytechnic, it’s even written on the examination paper that such devices would be confiscated by the institution.

I have heard a couple of differing opinions on this matter. One group is in support of the move, calling it irresponsible on the part of the students and they therefore deserve what they get. Another group wonders why the institution would engage in waste, suggesting that they should instead have sold the phones off and donated the money to charity. They are both partially right because the students should have known better while at the same time further polluting the environment should be anathema to an institution of learning. Literally going for scorched earth seems rather spiteful and serves no purpose, especially when you consider that nothing I have read so far indicates that they were caught cheating at their exams, only that they had banned devices in their possession, so it is possible that smartphone addiction is a part of the problem. Dousing the devices in gasoline and making a bonfire out of it will be of little help.

Besides, there may be a better way of handling such a problem.

It was not long ago that there were calls for the president to declare a state of emergency in the education sector. The reasons are obvious: Nigeria has one of the highest rates of out of school children on the planet, a number that has been growing for many years. The government’s efforts have apparently been too meagre to keep up with the exploding population, and the system is acknowledged by many to be close to breaking point. There are too many students, too few teachers, and even amongst the teachers that we do have, many are either unqualified or too poorly paid to be effective. A plethora of private schools have sprung up to plug the gap but many of them also pay the teachers peanuts. This is not to lay blame on any of these groups; a lot of parents are struggling to feed their families and consequently tend to fall behind in payment of school fees. The schools, then, are pressed for funds and can barely keep up. As a result of that, students are barely taught anything in school, are allowed to cheat their way into a half-decent score, and end up at a tertiary institution probably expecting more of the same. The phenomenon of parents who can afford it sending their children for university education anywhere from neighbouring countries to the Far East might soon extend to the secondary school level, if it hasn’t already. And we haven’t even touched on the rural areas or the ex-teachers who make some extra cash by sitting for secondary school leaving exams on behalf of others, a grave malpractice that could earn you jail time.

The National Youth Service Corps (NYSC), mandatory for every Nigerian who graduates from a tertiary institution, has been attempting to provide some relief for the education sector by deploying as many corps members as possible to secondary schools for many years. This stop-gap solution, apparently begun since 2012, however, is fraught with difficulty, as I found out during my service year.

While at the NYSC Secretariat, I needed to note something down and so asked the corps member nearest to me for a piece of paper. He handed me an entire sheet, on which he had drafted a letter. That letter, still in my possession, is a constant reminder that we have much to fix. In it, the corps member was applying to the State Coordinator of the NYSC to change his posting to an organisation which had assured him that he would be accepted. This is apparently standard practice at the NYSC when a corps member is rejected from the Place of Primary Assignment (PPA) where he or she is initially posted to; if the individual can secure an assurance, preferably in writing, from a company or organisation which is in one of the approved categories, then the NYSC will assign the corps member there. It makes sense because it keeps the gears spinning; if the NYSC took it upon itself to continually deploy corps members to places where they are not wanted or needed, a corps member could spend his/her entire service year being rejected and end up not serving at all. Anyway, what shocked me is that the corps member showed an inability to write a formal letter, something which we are all supposed to have learnt in secondary school. This fellow had gone the entire secondary school, and quite likely 4 years of university, yet was unable to compose a simple formal letter. “Kindly post me to ___ cost I have full assurance…” is not only the wrong way to begin a formal letter but the error highlighted is shocking. And yet he was probably first assigned to a secondary school to teach young children. This means the solution implemented by the NYSC, laudable though it is, is likely proving to be ineffective because you cannot teach what you do not know. 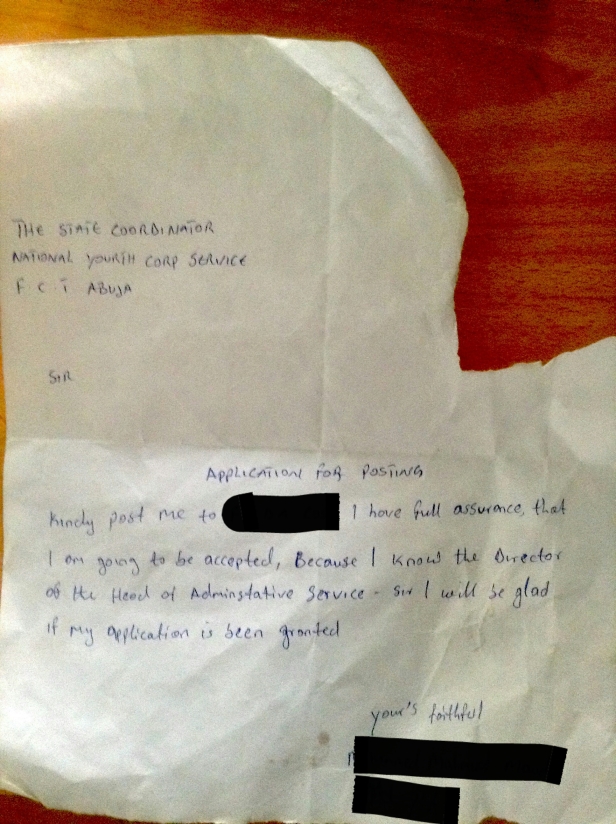 But what does this all have to do with exam malpractice and the subsequent torching of students’ devices?

Well it just so happens that I work at a tertiary institution myself. About a year after I joined, I became a member of a team assigned to provide students with an orientation before their Computer-Based Tests (CBTs). The orientation served as the first point of contact with students before they went into the examination hall proper. You will agree that tertiary institutions are designed to further the education of people who have reached a certain basic level. That is why there are tests a student has to pass sufficiently well before they can be accepted into one of these institutions. However, staff of these institutions often encounter students who have not achieved this basic level and you just have to find ways to deal with it as best you can.

During my first experience with conducting examinations at my institution, I noticed something which was initially confusing. I observed that when a student committed an infraction (this is before they go into the exam hall proper, remember), the lecturers there would demand that the student write a letter of undertaking to the Head of Department (HoD) apologising for the infraction and promising never to repeat it. The students, of course, are instantly petrified that they might be delayed or even denied access to the exam hall unless they confessed, in writing, to their infractions. Also, having it on record means that, if they do commit the same or similar infraction in the future, there is evidence that they are repeat offenders and may therefore face little leniency. That part made sense. What I could not understand, however, was why the lecturers chose that particular method of punishment because I seriously doubt that any of the letters ever found their way to the HoD’s desk.

After a few hours’ observation, however, the point became clear. Just like the corps member I had met years earlier at the NYSC Secretariat, many of the students had no idea how to write a formal letter. The few students who succeeded with only a typo here or there were pointed out to their colleagues as shining examples, and moved along to the exam hall. For the vast majority, however, it was a different scenario. I don’t have access to any of the letters they wrote, but many were shown to me on the day and I remember being horrified at some of the efforts, and a bit tickled by some of the errors. The lecturers would point out the errors and have them re-write the letters as many times as it took for them to get it right, regardless of how long the student was delayed for (they were all, without exception, allowed in to the exam hall afterward). It was nerve-wracking for many of the students and I’m certain they felt the pain of being suitably punished but, at the end of the day, they walked away having learnt something new.

That is what I think the Ibadan Polytechnic should have done; take the students’ infraction and turn it into a teaching opportunity. Most staff of tertiary institutions would agree that the calibre of students diminishes year after year, and there is precious little we can do about that. The required score to qualify for admission into a university was once again lowered this year by the Joint Admissions and Matriculation Board (JAMB) because, if they didn’t lower it, fewer students would make it to a tertiary institution and the country would have even more youth idly roaming the streets, which could pose a national security problem. That is the situation in which we find ourselves and we just have to make the best of it, making sure to use every interaction with students as a teaching opportunity. Just as the lecturers at my institution creatively employed teaching in their punishment, maybe the polytechnic could have done something similar. Because, if we approach their infractions with fire and brimstone, we may return them to society pretty much unchanged from how we received them.